A little bit about Boston around Copley Square

Anne Marie Kelly mentioned to me that some Computer Society people would be attending an IEEE meeting in Boston. I have already been preparing a website relating to Boston for a conference of the TeX Users Group being held in Boston in July 2012. Also, my Boston apartment is less than a 10-minute walk from the hotel of your meeting. Thus, it is easy for me to spend a few minutes writing some additional paragraphs about the area around the IEEE meeting hotel, as follows. 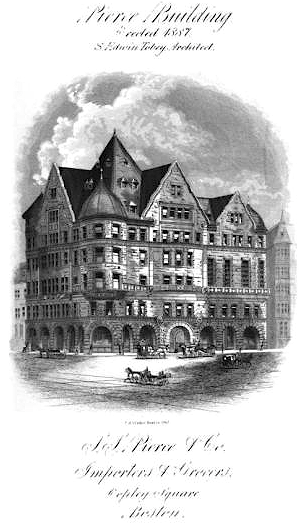 The Westin Copley is on the southwest corner of Copley Square. On the square to the east of the Westin, across Dartmouth Street, is the Copley Plaza Hotel. On the north across Huntington Avenue from the Westin is the Boston Public Library. The Westin's location is the one-time location of the S.S. Pierce grocery store company (see image to the right).

This area of Boston was created by filling, circa 1850 to 1900, the so-called Back Bay of Boston. Hence, unlike other parts of Boston, north of Boylston Street (on the far side of the library), the streets are laid out on a grid with the streets from the Boston Public Garden to the east to Massachusetts Avenue to the west having names beginning with the letters A, B, C, ..., H.

As part of this 19th Century urban development project, corners of blocks in a number of cases were set aside for more or less public buildings. Copley Square was a key element in this urban plan, with the Museum of Fine Arts being where the Copley Plaza hotel now is; H.H. Richardson's wonderful Trinity Church being at the east side of the Square; McKim, Mead, and White's spectacular Boston Public Library being at the west side of the Square; and New Old South Church being at the northwest corner of the Square. While you are so close, don't skip visiting the existing of these buildings, especially the library.

There are two big indoor malls near the Westin Hotel: Copley Place (which you can get to from the hotel via an enclosed bridge over what I think is Stuart Street—on the south side of the hotel), and the Prudential Center (which you can get to via an enclosed bridge from Copley Place or by walking west on Huntington Avenue from the hotel. The nearby shopping streets are Bolyston on the north side of the library and (better yet) Newbury running parallel to Bolyston a block farther to the north.

The Museum of Fine Arts is a 15-to-20 minute walk (or a three-stop subway ride) west on Huntington Avenue. At the intersection of Massachusetts Avenue and Huntington is Symphony Hall. On the west side of the Prudential complex is the Christian Science with the not-to-be-missed Mapparium (a 30 minute event). If you are into genealogy, the New England Historical and Genealogical Society is a short walk away, on the north side of Newbury Street a few steps east from Clarendon Street.

You can go to guidebooks, literature the hotel will give you, or to my Boston website for the TeX Users Group conference for more on other parts of the city. (If you go to my Boston website, please ignore the information sometimes being couched in terms of its location relevant to the Parker House hotel where that conference is being held.)

One more thing—a brief touch on eating places near your hotel. Lots of good restaurants are in the South End neighborhood (walk south on Dartmouth Street from your hotel) all the way to Tremont Avenue; or turn right on Columbus Avenue before Tremont Street and look for Charlie's Sandwich Shop (breakfast and lunch), Giacomo's Italian restaurant, Anchovies, and Petit Robert Bistro. There are plenty of good restaurants east and west on Boylston Street and on Newbury Street. I talk about some of these on my other website. I often get a bite of lunch at the food court in the Prudential Center. And, if I am at the Boston Public Library doing daytime research, I eat at the Courtyard Restaurant or the adjacent sandwich shop.

If you want specific advice on anything, feel free to ask me: dave@walden-family.com
Also, for the TeX Users Group conference, I have prepared a presentation on the printing and publishing history of Boston and Cambridge (including something about the libraries). If you happen to be interested in this topic, ask me for the URL of the presentation.